Back in December 2007 I was browsing the job classifieds in the local paper and came across an ad for an administration officer for the Myeloma Foundation of Australia Inc. I started at the end of January in 2008, working 28 hours a fortnight to provide administration support to the CEO and to take over most of the administration from the Victorian Committee, in particular Irene Beattie, although she continued to come into the office weekly to help out. Back then, the database was merely numerous Excel spreadsheets for all the various support groups, state members, seminars and MyeNews mailouts. The receipting was done manually with carbon receipt books and I would spend many hours hand-writing receipts and envelopes. Despite this, we were very “tech-savvy” in that we had an EFTPOS machine. It was wonderful when we got our first proper database – receipting almost became a joy.

Pina joined me in administration in September 2009.  In early 2010 I obtained my Certificate IV in Financial Services, set up a contract bookkeeping business (although my clients have progressively dwindled as my hours at Myeloma have increased) and took over the finances from our volunteer bookkeeper.

We outgrew our office in Suite 310 and moved to Suite 502, where we were soon joined by Steve Roach, who was working as a fundraiser, and Hayley King (Beer), our new Victorian nurse. Life was getting busy at the Myeloma Foundation of Australia and we were slowly growing. However, it was also a time of uncertainty, as our funding was running out and there was no guarantee of more. Steve was appointed CEO upon Mike’s retirement and was able to secure more funding.  In 2012, we moved from Kew to a newly renovated shopfront in Swan Street, Richmond. The highlight of this new location was that it came with a remote-controlled garage to park in – no more parking fines! Then in 2014, as if we hadn’t moved enough already, we moved for a fourth time – though this time only next door – to our current location at 333 Swan Street. While we no longer have a garage, we do have more parking than before. On Thursdays when we are all in the office, it’s like a game of Tetris getting all the cars in.

I have progressed to working 58 hours a fortnight doing all things finance and HR (I obtained my Diploma in HR Management in 2016) since starting off in 2008 as an admin officer. I also manage our database (we’re up to our third one) and IT systems, manage our lovely volunteers and help with events. I have met so many interesting people through our community, volunteers and fundraising events (such as Business of Winning and Masters of Rock). Unashamedly, I was a huge Sherbet fan with a teenage crush on Daryl Braithwaite, so imagine my excitement at not only meeting him at Masters of Rock but also at getting his autograph and a photo with him – I was weak at the knees.

So much has happened during my time at Myeloma Australia. I have worked for two CEOs, worked in four offices, seen three logos and seen us grow from three nurses to eleven – and soon to be fourteen – nurses around the country with three more support staff and an MSAG assistant. It is exciting to see what Myeloma Australia has done and what is planned for the coming years.  I am proud of the work that we do.

To be the longest serving member of staff is an achievement of which I am proud.  It hasn’t always been easy but it is testament to a fulfilling and rewarding job despite the challenges that get thrown at me from time to time. As to whether there will be another ten years – who knows – but while I have bills to pay and children spending my money, Myeloma Australia is stuck with me. 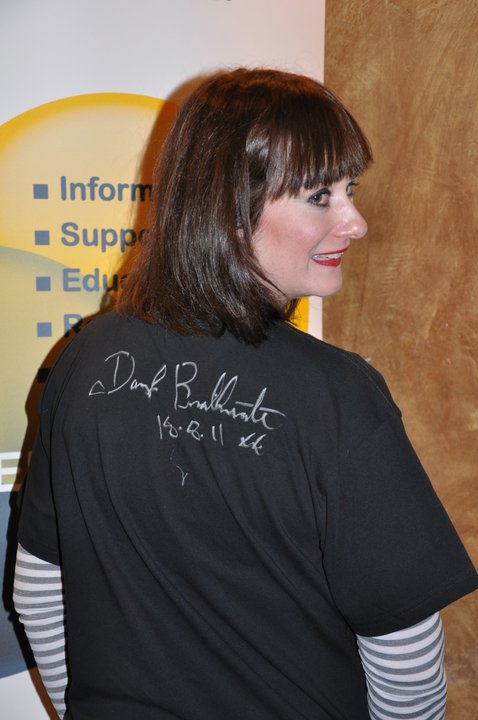