Myeloma Australia > Who we are

Myeloma Australia is the only Australian myeloma specific not-for-profit organisation.

We exist to support, educate, inform, empower and bring hope to people who are living with myeloma, and their loved ones.

We also raise community awareness and understanding of myeloma; educate health professionals involved in the care and treatment of those living with myeloma; advocate for improved patient access to the latest treatments at affordable prices; and facilitate myeloma research in Australia.

Myeloma Australia provides up to date information and caring support via our specialist myeloma nurses. All our services are provided free of charge to ensure equitable access. Our services include:

Myeloma Australia is a not-for-profit organisation, endorsed by the Australia Taxation Office as a deductible gift recipient (DGR) and has charity tax concessions status.

Myeloma Australia’s mission is to facilitate myeloma research in Australia, to support and inform those living with the disease and educate those involved in its care and treatment. Myeloma Australia is determined to raise community awareness and understanding of myeloma, and to improve patient access to the latest treatments at affordable prices.

Myeloma Australia’s purpose is to:

Myeloma Australia was formed in 1998 by a small number of driven people who were each profoundly affected by myeloma. They discovered for themselves that the path to myeloma diagnosis was often slow and uncertain, and that reliable information and access to support was scarce. Their response was to come together to form Myeloma Australia, in order to make the path easier for others in the future. One of our founders – Brian Rosengarten  – is still actively involved with Myeloma Australia as our President. Another of our founders – Bob Moran – OAM – was also actively involved as our Patron up until he passed away in June 2020.

Prompted by their health professionals, three couples who were impacted by myeloma (Bob and Glenys Moran, Brian and Roslyn Rosengarten and Donald and Judith Brown) met in August 1998.  They shared a desire to encourage the government, universities, scientists and the general public to dedicate time and money towards research into multiple myeloma.

At that time their own investigations had indicated that very little scientific research was being directed towards the understanding and search for a cure for myeloma in Australia. They embarked on a mission to change this, leading to the birth of Myeloma Victoria, which later joined with other like-minded organisations in New South Wales and South Australia to become The Myeloma Foundation of Australia, now known as Myeloma Australia. 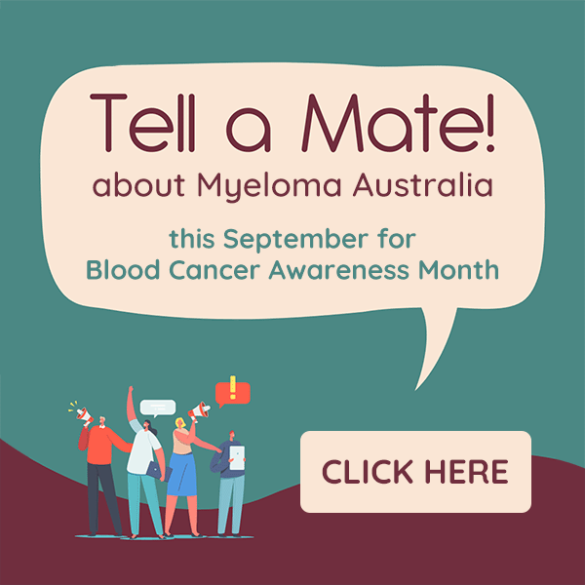